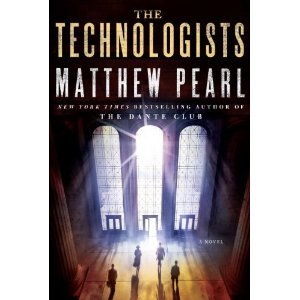 When a mad scientist terrorizes Boston, it’s up to a group of students from the Massachusetts Institute of Technology to stop him.  Matthew Pearl’s latest novel, The Technologists, returns to the 19th century Boston setting of his novels The Last Dickens and The Dante Club and once again crafts a novel out of scraps of reality in a way that’s so seamless, you’ll swear you’re reading a beautifully written true crime book. (Erik Larson’s Devil in the White City comes to mind.)
The novel’s hero, Marcus Mansfield, is a working class senior at MIT, and much of the subtext of the story involves the “town and gown” tensions between the elitist Harvard students and those enrolled at the city’s newest establishment of higher learning (including a very smart woman who is the sole female member of “The Technologists” and instrumental in solving the mystery).
From the opening chaos of the deadly harbor incident, we’re drawn into a world where science and technology are beginning to emerge as forces that will shape the next century. Very soon after that the class lines between the Harvard students (particularly a snotty Harvard crew team member named Blaike) and the Institute of Technology students are drawn. We know that there’s going to be fierce competition between them in many ways before the story is over.
Marcus is a very sympathetic character, a smart underdog (mom’s a religious zealot, stepdad is a disappointed and bitter man) who is an athlete with a brain. His best friends Richard and Bob are a little on the “sidekick” side of character development at first, and the writer seems to strain for “humorous” dialogue at times, but we like these people.
Hammie is an interesting guy who reminds us a bit of the eccentric Sherlock Holmes in the current BBC version.  He’s clearly got some sort of … problem, whether it’s OCD or some syndrome along the autism spectrum … but it makes him intriguing.
Blaikie is pretty on the nose as the arrogant alpha male who has achieved every goal he’s hoped to reach but even so can’t help but put other people down.  (And we look forward to seeing him go down, especially after he has his team ram the boat Marcus and his buddies are in.)  It’s also hard to believe he would go to such extreme lengths to get Eddy back at Harvard.  Ellen Sparrow is smart and lovely but there are times she reminds us of Hermione dealing with Harry Potter and Ron. (There are other times she reminds us of Mary Russell from Laurie King’s Sherlock Holmes’ novels.)
Once we get into the mystery, we are totally involved.  What caused the mysterious flash in the harbor? What caused the navigational instruments to go haywire?  The fear of technology, the fear of machines is an interesting backdrop to a story that is already rich with layers, including the prejudice against Catholics and the snobbery toward “townies.”  When Marcus despairs of being a college graduate, it reminds us a bit of Good Will Hunting.   The two women vying for his affections, Lydia Campbell and Agnes Turner, are on opposite ends of the economic spectrum and we are happy that Marcus chooses well.
The steampunk elements work nicely in the story, especially the “Steam Man” that Hammie takes.  The MIT history (which is apparently all true) gives the writer a nice canvas to paint on. The more real-life details he sticks into his story, the more real the construct. At its heart, this is a mad scientist story and there’s a lot here to work with, and not just the mystery of who and what is causing the catastrophes.  This book will definitely appeal to mystery fans as well as readers who like Ben McIntyre (The Napoleon of Crime) and Larson.
Posted by Katherine Tomlinson at 12:29 PM

Labels: Ben McIntyre, Devil in the White City, Matthew Pearl, The Napoleon of Crime, The Technologists