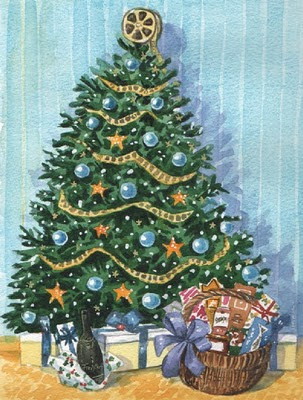 In this week's episode a wannabe screenwriter whose former partner has been wildly successful attends a Christmas party at his old friend's house. He leaves feeling very unfestive.
As always, Mark Satchwill has contributed a terrific illustration.

Here's a short excerpt from the story:

Christopher "Christo" Garland had gotten lost on the way to Eric and Celia's house. He had Mapquested it but he'd ended up in the wrong lane at that crazy intersection near the Iliad Bookshop and somehow he'd ended up on Burbank Boulevard going east. When he passed Circus Liquor, it reminded him that he hadn't bought a gift, so he parked and ran in to see what was cheap.

He grabbed a black bottle of Freixinet and brought it to the counter. He swiped his credit card as casually as possible, mentally crossing his fingers the transaction would go through. It didn't.

He tried again as the clerk eyed him sympathetically. When the verification failed a second time, Christo made a show of examining the card. "Expired last month," he said. "I forgot to put the new one in my wallet."

The clerk, who knew all about expired credit cards, just nodded as Christo pulled the last bill from his wallet, a twenty.

And just to show the clerk he didn't need his pity; Christo stuffed the change into one of the charity jars set up by the cash register. He probably makes what? Minimum wage? And he feels sorry for me?

By the time Christo finally arrived at his destination, there didn't seem to be a vacant parking space left in all of Toluca Lake. In front of Eric and Celia's house, there were uniformed valets hiking cars back and forth.

Eric and Celia hired valets for their party? I wonder how much that cost?

Read the rest of the story here.
Posted by Katherine Tomlinson at 12:46 AM