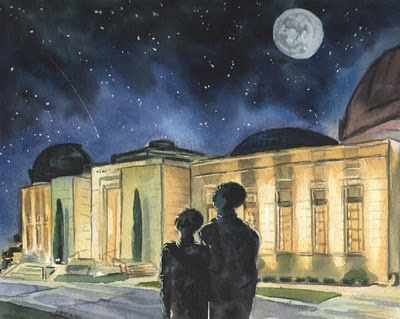 The story continues over at NoHo Noir with this flash fiction about a father and a son contemplating the mysteries of life. You'll see these characters again when the father is accused of murdering his ex-wife's new boyfriend. (The title of the series is NoHo NOIR after all.) The illustration by Mark Satchwill features my favorite building in the world, L.A.'s Griffith Observatory.

Here's an excerpt: The L.A. Observatory was Ty Garrett’s favorite place in the world so when the boy asked him to take him there, James was happy to oblige. Ty had been moody and restless all weekend, unwilling to open up about what was bothering him. James hoped a little star-gazing would make Ty feel better.

James hated that he didn’t know what was going on with his son all the time. He was 11 now, more little man than little boy, and it seemed like every time he saw him, Ty had changed in some subtle way. At least Erika had been good about the custody thing. But still, he hated her for breaking up the family, hated her for leaving him for the whitest man in Encino, a dentist who had billboards in three languages polluting the landscape all over the Valley.

It wasn’t the money. James was a good provider. He had parlayed a stint working in an Army motor pool into a business servicing temperamental foreign cars and their equally temperamental owners, people who pronounced “Jaguar” as three syllables like they’d been born in London, England and not London, Kentucky. In a good year, James pulled down six figures. Erika had no cause to complain there.

“Tooth guy wants me to call him ‘Uncle Tim’,” Ty blurted out, as if in answer to his father’s thoughts. Erika didn’t like it when Ty called Tim that and asked James not to encourage the disrespect. Most of the time he respected her wishes but now didn’t seem to be the moment for a lecture.

James glanced at his son’s anxious face. “Must be getting serious with your mother,” he replied neutrally.

Ty nodded. “We’re going to move in with him at Christmas,” he said.

READ the rest of the story here.
Posted by Katherine Tomlinson at 12:14 AM