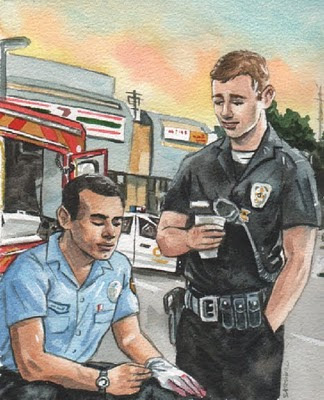 A picture really is worth a thousand words, isn't it? The image here is by Mark Satchwill, who is my partner in crime over at NoHo Noir, where each week we chronicle the lives of a diverse set of characters whose stories intersect and converge in unexpected ways. This week's story is called "Aftermath" and it's about a cop, a paramedic and a beat-down. Here's an excerpt:

It wasn’t the blood. Ethan once worked a case where a murderer had used his wife’s blood to repaint the kitchen and then sat down at the table to eat a peanut butter and jelly sandwich. One of the crime scene techs had puked when he first walked in but Ethan hadn’t been bothered at all.

The thing about murder was—and he’d thought about it—in the end there was always a reason somebody ended up dead, even if that reason was that some douche just got up in the morning and decided it was a good day for someone to die.

Car crashes though—they were just random events, hiccups of fate unless you subscribed to chaos theory and nonlinear dynamics where everything could be predicted from simple, deterministic equations. Ethan had never been particularly good at math so he just went with random. Read the rest of the story at: NoHo Noir

Posted by Katherine Tomlinson at 8:09 AM