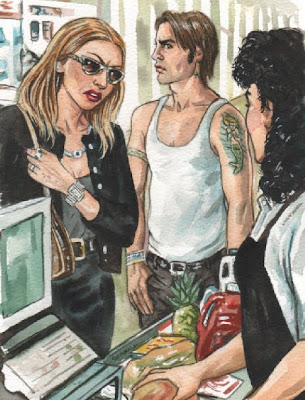 This week at NoHo Noir, a trophy wife and an unimpressed supermarket checker go mano a mano in the express line. There's a bit at the end, where the trophy wife--who's wearing a quarter-million dollar watch--tries to use an expired coupon. That was inspired by a story I once heard about Bill Gates holding up a line because he had a five-cent off coupon for some ice cream. I don't know if it's true--it's so deliciously snarky--but it makes for a great story.

If you're following the series you'll note the tattooed guy in line behind the trophy wife is Chris from "House Blend" who ended up with the wrong Jessica on his coffee date. We'll see him again. We'll also see the wife and the checker again.

I hope you enjoy 15 Items or Less.
Posted by Katherine Tomlinson at 8:42 AM