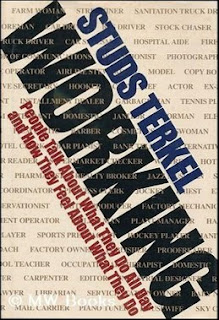 Studs Terkel's oral histories are treasure troves. (The zombie novel, World War Z is actually an homage to Turkel's WWII history, The Good War.) His book Working (which was made into a musical), is a tapestry woven from many voices--celebrating the working woman and man in all their diversity. There is pride in work here--from the construction worker who likes looking at a skyline and seeing what he has helped build--but there is also despair and anger. But most of all there is a sense that work gives meaning to a life. The book was published in 1974 and in the 40-some years since, some of the jobs chronicled have ceased to exist. Writers, especially, should dip into this book--the characters are real, and fascinating, and original. 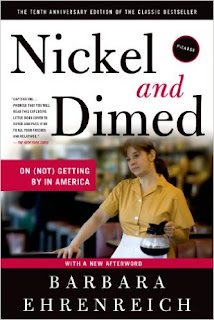 Barbara Ehrenreich is a writer with a feminist slant who has written on subjects as diverse as God and sex workers. When she set out to investigate the idea that a job--any job--could be the key to a better life, she went undercover to see just how that might work. The answer was--not very well. Her book, Nickel and Dimed: On (Not) Getting By in America, is an eye-opener that anyone who has voted against a minimum wage needs to read. Ehrenreich's prose is graceful, and the book never descends into ranting, though there is passion here. She had an idea that all was not as rosy as it appeared on the surface, but some of what she found (particularly insie a "cleaning service job") shocked her. It will shock the reader too.

The latest book I'm recommending is Diane Mulcahy's The Gig Economy, which has a totally different focus. Yes, it talks about how work has transformed from a linear career to a series of "gigs" strung together by workers, but Mulcahy's focus is on how making this new reality work for a worker.  It's not just fast food workers and Uber drivers, she points out. As an adjunct professor, she's also part of the gig economy, moving from position to position in what one reviewer called, "an empowering search for freedom." As someone who has been a full-time freelancer for more than 20 years, and someone who has had to 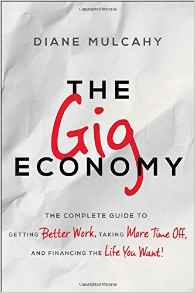 hustle for gigs on Craigslist at times, I can vouch for the freedom, but also for the uncertainty. Mulcahy's book has some great strategies and tips for finding more and better work and also some pep alks about defining and refining goals. Well worth the read.

Posted by Katherine Tomlinson at 9:13 AM 2 comments:

Words to Live By 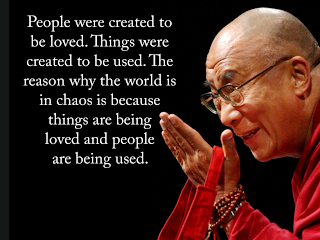 I am increasingly troubled by conspicuous consumption on any level. I'll see an ad for "affordable shoes" and think, "they're cute" and discover they're $138. Here on Planet Reality, we don't buy $100 shoes. Maybe if I worked in an office and I had to keep up appearances...
When I worked for Los Angeles Magazine, which was owned by ABC at the time, I wore corporate attire, and that meant Anne Klein heels and little designer suits. But these days, it just kind of makes me sick that people buy $85 lipsticks and don't really think about it. Maybe if it was the only lippie they were going to buy for the season...
I think about Gilded Age excesses. I think about all the money I've wasted over the years myself, buying tons and tons of frivolous stuff.I live a simpler life now. I am learning the difference between "want" and "need." But it's harder than I would have thought.

Posted by Katherine Tomlinson at 12:03 AM No comments:

Daughter of the Midnight King 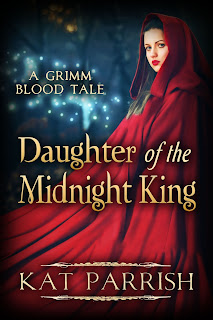 This magical, novella-length sequel to Bride of the Midnight King continues the love story of Yalira and the vampire king Idrax.
Now pregnant with their child--the first natural-born vampire in centuries--Yala becomes the center of a three-way struggle for control of the kingdom of Eindar. Alliances are made and broken among those loyal to Idrax, the humans who want a larger say in their government, and the magic-born vampires whose thirst for power knows no bounds. While intrigue threatens the court of the Midnight King, Lord Thyr, the king's roguish cousin, finds love in a most unexpected place and the queen's stepsister Rilla encounters romantic difficulties in her relationship with master painter Ruel who initially courted her but who has been distant of late.
It's complicated.
This is the story of what happens after happily ever after in a Cinderella story of another sort. A blend of fairy tale romance, political and court intrigue, and familiar and fresh fantasy themes, The Daughter of the Midnight King expands the universe in Bride of the Midnight King--adding even more magic to the mix. New characters are introduced and fresh facets of familiar characters are explored.
Daughter of the Midnight King does NOT contain a cliff-hanger.
Posted by Katherine Tomlinson at 5:00 PM No comments:

Bride of the Midnight King 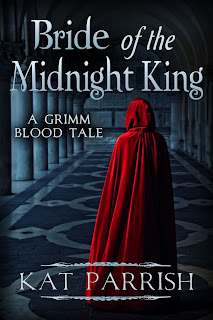 Subscribe here for updates and giveways from the author.

Bride of the Midnight King is a fairy tale fantasy with a dash of the paranormal. This is a novella set in a fabulous fairy tale land where humans and vampires co-exist. Bride of the Midnight King is based on one of the most beloved fairy tales of all time, melding the romantic/classic Cinderella story and a richly textured vampire mythology to create something unique and fantastical.
And like all the best fairy tales, the story begins with ...
Once upon a time...
There was a land called Eindar, and those who lived there called it “home,” but those who lived beyond its borders called it “The Divided Kingdom” because it was a place where humans and vampires shared the land but divided the day’s hours into sunlight and shadow, and there were only a few whose lives were lived in both realms.
Eindar had once been ruled by a royal house of humans, but that era ended when the last human king—Lorant the Third—took a vampire wife and died, leaving the kingdom in her care. Queen Isix abdicated in favor of her son Adraxus, and the sons of his line had occupied the throne of the Shadow Palace ever since.

Read more »
Posted by Katherine Tomlinson at 4:45 PM No comments: 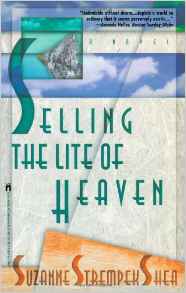 Check out Selling the Lite of Heaven. It reminded me a lot of the movie Crossing Delancey with a bit of My Big Fat Greek Wedding thrown in. It's the story of a woman who's left at the altar by a man who has decided to become a priest and what happens when she tries to sell her engagement ring in the Pennysaver. (Nowadays, it would probably be CraigsList.)

The characters are very likable and relatable and if you generally turn up your nose at "romance novels," this is more like a lit fic read than, say, a Harlequin. I liked it a lot and think it would make a lovely small movie, character-driven and full of community color. You can find the book here.

Posted by Katherine Tomlinson at 2:30 PM No comments: 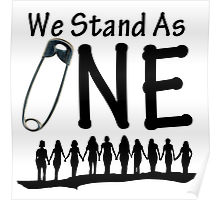 I've never been much for wearing t-shirts with slogans (or putting them on bumper stickers either), but after the events of last year, I think it's important to make a stand in any and every way I can. It horrifies me to think that people might be afraid of me because so many women who look like me--white, middle aged--voted for hate and exclusion and racism and bigotry. A t-shirt with this graphic on it is my first purchase of 2017. I will be wearing it to the local anti-inaugural march. You can get yours here.
Posted by Katherine Tomlinson at 11:14 AM No comments:

In Sunlight or in Shadow 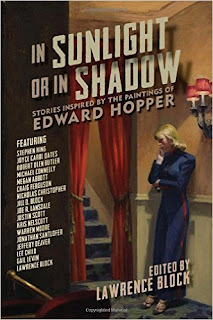 A few years ago I participated in Brian Lindemuth's "Short Story a Day" challenge for a year. I discovered a lot of new writers that way and it also gave me an excuse to re-read short stories that I'd always loved. I'd like to read more short stories in the coming year and I'm going to start with this colleciton. I'm intrigued by the concept but look at the lineup of writers--Stephen King, Megan Abbot, Joyce Carol Oates, Craig Ferguson!!!  In Sunlight or in Shadow is currently available in both digital and hard cover here.
Posted by Katherine Tomlinson at 10:38 AM No comments: