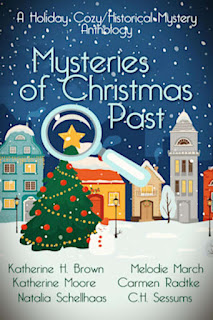 For my story in this collection, I borrowed from a little family tradition--Bubble Loaf for Christmas breakfast. My family had our big dinner on Christmas eve, then ate a huge breakfast on Christmas morning to fortify us. And then we ate leftovers the rest of the day so my mother didn't have to cook. (There were always plenty of leftovers. My mother came from the Southern tradition of cooks who would put enough food on the table to feed an army and then make a last-minute batch of biscuits just in case someone didn't get enough to eat.)

When I moved out of the house, I took a lot of my mother's Christmas treat recipes with me, in that little blue and yellow tin recipe box that all mothers of her genertion seemed to have.

There was cranberry orange bread and chocolate chip banana bread and an insanely good pumpkin bread with golden raisins and walnuts. But I didn't learn about Bubble Loaf until both my parents were dead and I was on  my own to create my own traditions.

This recipe came from my sister's girlfriend and I've made it every Christmas for at least twenty years. The girlfriend moved on and my sister did too but Orange Bubble Loaf remained.

Combine the sugar and dried orange peel in a shallow bowl.

Cut the thawed bread dough into pieces about an inch square and then roll each square into a little ball.

Dip the dough balls into the melted butter, then roll in the sugar orange mixture until coated.

Place the “bubble” into the pan.

Cover with a clean dish towel and set in a warm place until the dough has risen and doubled in volume.

Bake at 325 until golden brown. Allow to cool before serving.

If freezing, slightly under bake the bread  so that when the bubble loaf is reheated, it won’t get too toasty.

One loaf’s worth of of dough “bubbles” will fit into one pan so you'll have one pan to keep and another to give away.

Posted by Katherine Tomlinson at 9:57 AM