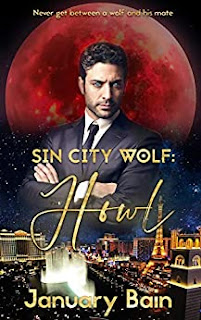 This is the first book in a series and it is a sizzling debut.  The world of billionaire werewolf Cristaldo Luceres (the people who work for him call him "sire") is filled with luxury. There's his expensive single-malt and his personal helicopter. And his bespoke suits.  It's also a world filled with danger--constant threats from a rival werewolf clan, the annoyance of dealing with a card counter at his flagship casino, the Glitter Palace--and the constant threat of betrayal. Although his clan his tight--his twin brother Lucius works closely with him, and their younger brothers are in school in Rome--there are temptations and power struggles, and all sorts of ...hungers.

This story of Cristaldo's cataclysmic connection to a woman who seemingly is fated to be his mate fuels the story, which  starts out hot and only becomes more incendiary. Because  unlike most of the women Cristaldo has met, Everly is not going to be a pushover.  She feels the attraction, but she doesn't have a great track record with men and there's a restraining order out on her last (her first) boyfriend, a dangerous psychopath.

Bain has done a terrific job of building the world of this story. The characters  have real connections to other people--Everly to her two best friends--bandmates in a group they call THE SIRENS--and Cristaldo has his brothers and Serge, his consiglieri, and  Sly, the charming majordomo who's been put at Ellery's disposal. But there are also the characters from the other clans--all of them descended from Roman royalty and all of them with clashing agendas. There are also vampires in this world and they have a very interesting role in the werewolf world.

The course of true love is never smooth, even if it's between a man and a woman fated to be "Forever Mates."

There's a lot of heat in the love/sex scenes, including a spectacular take on the whole "dream lover" trope.  And yet,  the prose never shades over into purple. It's streamy. It's  hot, but it's not the kind of out and out erotica that can turn some readers off. (You will definitely be turned on.)

Posted by Katherine Tomlinson at 11:17 PM