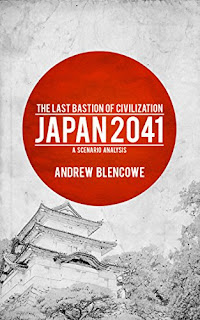 In the wake of the presidential election, I've been reading a lot more political-themed fiction and non-ficiton. This book seems to be a fusion of the two and the premise is provocative. The Last Bastion of Civilization: Japan 2041 sets out a scenario for a different kind of future. I'd really like to believe there is a civilized future out there. Here's the blurb and a testimonial:

Brexit, Trump, Le Pen: Where Are We Heading?

If you’re a contrarian, or simply wish to imagine a radically different future, The Last Bastion of Civilization will challenge your current world-view.
Written as a series of letters and short essays, each of the 18 chapters attacks a present-day assumption with a counter-punch argument of its own.
Sometimes controversial, always challenging, it’s a future to consider given today’s world affairs.

“Blencowe’s writing is fast-paced and easily readable. The structure of the book is unusual, in that it's not a novel, though not quite non-fiction. I can best categorize it as fictional journalism, or perhaps an imaginary opinion piece. He expresses himself clearly and his intentions and message are never in doubt.”  —Andrew Henry
Posted by Katherine Tomlinson at 11:16 AM