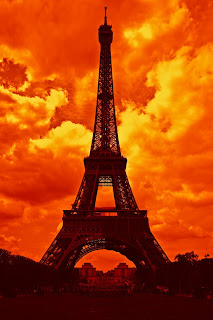 #PRAYFORPARIS
I have friends and clients and colleagues who live in Paris. They're all safe. Or as safe as you can be in a city that's in lockdown mode. By early evening US time last night, social media was already full of ribbons and French flags and hashtags and expressions of horror.
And I couldn't help thinking that the word "terrible" is the same in French as it is in English.
And how terrible is it that there's even a colored ribbon FOR terrorist acts?
Paris is my heart's hometown. The Charlie Hebdo attack hit home for me because I started life as a journalist.
And now, after this latest atrocity, there are conservative journalists already blaming the influx of Syrian and Iraqi refugees for fueling the crisis. Classic and cruel "blame the victim" mentality. But I remember what it was like in the days after 9/11. The Indian man murdered by the zealous patriot who decided he was a terrorist because of his skin color.
Today's tears and prayers are for the people of France, but tomorrow they must be for all people who live under the shadow of terror.
Posted by Katherine Tomlinson at 12:07 PM