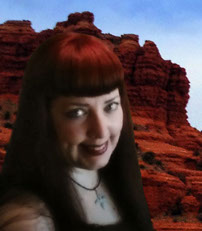 A native of Southern California, Christine Pope has been writing stories ever since she commandeered her family's Smith-Corona typewriter back in the sixth grade. Her short fiction has appeared in Astonishing Adventures, Luna Station Quarterly, and the journal of dark fiction, Dark Valentine. Two of her short stories have been nominated for the Pushcart Prize.


Christine Pope writes as the mood takes her, and her work encompasses paranormal romance, fantasy, science fiction, and historical romance. She blames this on being easily distracted by bright, shiny objects, which could also account for the size of her shoe collection. After spending many years in the magazine publishing industry, she now works as a freelance editor and graphic designer in addition to writing fiction. She fell in love with Sedona, Arizona, while researching the Sedona Trilogy and now makes her home there, surrounded by the red rocks. No alien sightings, though...not yet, anyway!

KT: Your new book, Angel Fire, rounds out the paranormal/sci-fi romance series you dubbed “The Sedona Trilogy.” Is that the last we’ll see of those characters?

CP: I hope not. I do have another trilogy partway sketched out in my head, but I’m sort of waiting to see how the original trilogy does now that it’s complete before I start into anything new. 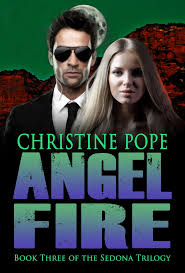 KT:  Did you know when you wrote the first book in the series (Bad Vibrations) that the story would evolve into a trilogy?

CP: Actually, I didn’t. The original idea had been kicking around in my head for a while, and then it was on a later read-through while I was reformatting the book for print that I realized there was this overarching story going on behind Persephone’s and Paul’s romance that needed to be told. That’s when I decided to expand the book into a trilogy.

KT: Your love for Sedona really comes through in the books and I love that you set so many scenes in real places. When did you first visit Sedona? Did you fall in love with it the moment you set eyes on the red rocks?

CP: Our first visit was at the end of March in 2011. While I was doing research for Bad Vibrations, I came across a lot of references to Sedona in terms of UFO activity and alien abductions, including the theory that there’s actually an alien base built underground somewhere in Boynton Canyon. I’d already heard that the area was beautiful and a New Age center, so we decided to take a road trip and do some research in person. 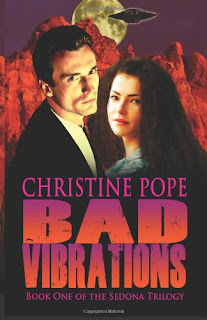 In a way, my experience kind of mirrors that of Persephone in Bad Vibrations, since we wound our way down through the canyon on 89A and it was dark when we came into town. So it was really the next morning that I got my first glimpse of the red rocks – and yes, it was love at first sight. I can’t even really explain it, because I’m not that much of a “desert” person, but this doesn’t feel like a desert to me because there’s so much that stays green here year-‘round. In fact, it’s very green right now because of the monsoon rains we get in northern Arizona at this time of year.

KT: What’s next for you this year?

CP: Well, the next book out will be another novel in the Gaian Consortium series, The Gaia Gambit. It’s finished and with beta readers as we speak, so I’m hoping it will be out in at least ebook format by the end of August. Toward the end of September I’ll be re-releasing the second of my books that were published by a small press and to which I’m gradually getting back the rights. That one, Playing With Fire, is a paranormal romance novella.  In October I’m planning to put out an omnibus version of the Sedona Trilogy, and then either in later November or early December I’ll be releasing Ashes of Roses, a new novel in my Tales of the Latter Kingdoms series, this one based on the Cinderella fairytale.

KT:  That’s an ambitious publishing schedule. Do you write every day? Do you have word count goals for the day or week? Do you ever work on several books simultaneously?

CP: I try to write every day, but sometimes life gets in the way. Right now I’m taking a small break because I just finished two full-length novels in June and July, respectively. I do aim for around 2,500 words from each writing session. Of course, some days I do more, some less, but it makes for a fairly consistent number of around 12-15K a week when I’m in the groove. That way I can generally write a full novel in around two months.

As far as working on several books simultaneously, I may stop working on one project and pick up another for a while, then go back to the first one, but I don’t actively write on two different books at the same time. Voice is really important to me, and I think sometimes it can get muddled if I’m going back and forth on two projects at the same time.

KT: In the days when traditional publishing was the only game in town, it would have been unusual for a writer to publish more than one book a year. Nowadays, though, it seems like an author needs to release something new every few months or so to stay competitive. Do you feel that pressure?

CP: I think most of us are feeling that pressure lately. I know some writers who are really selling books, making the NY Times and USA Today bestseller lists, and they feel the same way, that if you don’t keep fresh content in front of your readers, you lose visibility and then have to work that much harder to keep up. Not that I’m writing at that level, but I do have my readers, and I don’t want to make them wait too long for the next book. It’s just difficult when you’re trying to juggle all that along with “real world” demands on your time.

KT:  Do you listen to music while you write, or do you find it distracting?

CP: I always listen to music when I write, always movie soundtracks, and generally ones from films I’ve only seen once, or sometimes not at all. Soundtracks can be great for establishing mood (after all, that’s why they’re in the movie in the first place), but I stay away from scores I know really well, like Lord of the Rings or Star Wars, just because they’re too firmly connected to a particular franchise in my mind.

KT: What about other distractions? Do you have hours where you turn off the phone or pause your email so you can concentrate?

CP: Anyone who knows me knows not to call my cell phone, since I never answer it (we decided to get rid of our land line when we moved to Sedona). ;-) I can’t really turn off my email completely because that’s how my clients contact me, but I do try to ignore the Internet except for research purposes.

KT:  I understand the science fiction romances you write under the umbrella title “The Gaian Consortium” are kind of spicy. Which of the aliens in movies or television strike your fancy? And do you ever “cast” your characters while you’re writing them, putting faces to names on the page? 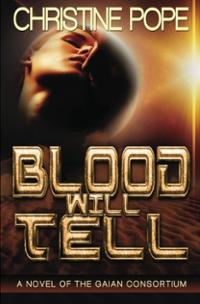 CP: Well, some are spicier than others. The Gaia Gambit definitely is, and Blood Will Tell somewhat, while Breath of Life is really suitable for anyone fourteen and up, probably. My first “alien” crush was definitely Mr. Spock! And my current one is Loki, although he doesn’t really “look” alien. (His brother isn’t bad, either.)

I usually don’t “cast” my characters beforehand, although I’ll often come across an actor later after the book has been written who would be perfect for the part. Georgina Haig, who played the grown-up Etta on Fringe, would be absolutely perfect for Kirsten, from Angel Fire. And after I saw his posters as Kili for The Hobbit, I thought Aidan Turner would make a great Kadar, from Binding Spell.

KT:  Is it true you began mapping out the world that became the “Latter Kingdoms” when you were a teenager?

CP: I did. I first started inventing Sirlende and North and South Eredor and all the rest back in high school. My one and only “trunked” novel was set in that world, although I’d like to think the world itself has gotten much more sophisticated over the years.

KT:  Did you read a lot of fantasy growing up? What were some of your favorite books in the genre?

CP: I did. I’d read The Hobbit and The Lord of the Rings twenty times by the time I was out of high school, and also Donaldson’s Thomas Covenant books and Mary Stewart’s wonderful Merlin series, and so much by Ursula K. LeGuin and Tanith Lee, and…well, the list goes on.

KT:  You’ve said that your favorite fairy tale is “Beauty and the Beast” and in your romantic sci fi novella  Breath of Life you put your spin on the tale. What’s your favorite version of the story?

CP: I adore both Robin McKinley’s book (the original Beauty; I didn’t enjoy the rewrite nearly as much) and the Disney version. Also, I was a huge Phantom of the Opera fan, and that story has many echoes of Beauty and the Beast in it as well.

KT:  There are a lot of badly Photoshopped book covers out there, but your covers look great. What do you think makes a good book cover?

CP: Well, as with any form of art, a lot of that is subjective, but I think having an eye for fonts is really key. I’ve seen really beautiful images basically ruined by bad cover typography. Unfortunately, fonts do tend to get abused by people who haven’t had much training in graphic design. It’s the marriage of typography with the image that can help to make a cover stand out.

KT: The cover art for the books in your “Tales of the Latter Kingdoms” series is gorgeous. Where did you find the artist? 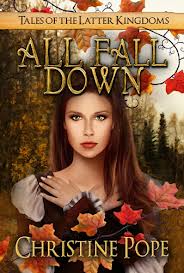 CP: One of my Indie Author Services clients had me do a couple of covers with some really beautiful original cover art. I asked who the artist was, because I’d already decided that for my fantasy series I really wanted original art, not photo-manipulations. So my client put me in touch with Nadica, and she’s been doing the art for all those books. Sometimes, if I have a background already worked out, I ask for her to only draw the main character, but she’s also done the full cover as well (minus typography; I do all of that).

KT:  What do you do to celebrate when you finish a book?

CP: Even though it’s been quite a few books “under the bridge,” at this point, my husband and I still always pop a bottle of champagne and go out to dinner. When I finished Angel Fire, we did something a little extra special, since it was the last book of the trilogy – we went out to the Enchantment Resort in Boynton Canyon and had drinks there, then finished up with dinner at René in Tlaquepaque Village here in town, since René is one of our “special event” restaurants.


Chritine is hosting a Rafflecopter giveaway in conjunction with a blog hop for Angel Fire. Click here for details.

Posted by Katherine Tomlinson at 10:22 PM