Cats are not dogs

My family had cats as pets. My father wasn't a fan of the feline but there were five of us in the family and he was outvoted. (At the time of his death there were three cats in the household and we came home from his funeral to find all three of them lounging on his bed. "That's right," they seemed to be saying. "You're dead and we're still here. Neener, neener, neener.") 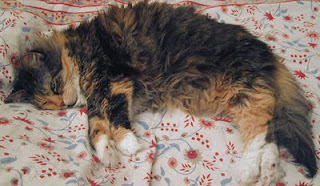 I've had roommates with dogs from time to time, mostly silly little dogs--a cockapoo, a Chihuahua--and I really like dog energy, but you don't have to walk cats when it's raining like ... you know what.  I leave dry cat food out overnight so my cats don't wake me up at the crack of dawn, begging to be fed. When I lived with the Chihuahua, she was up every morning at 5 a.m., ready to eat. And since I was the one awake, I was the one who fed and walked her. She got used to that and never bothered her actual owner.

People who have never lived with cats don't quite get them. Cats have a bad rep, basically, and the non-cat-owner assumes that they are not social animals and that they are incapable of affection. So when that person gets to know a cat, and likes it, the first thing they say is, "He's like a dog."
I was thinking about this as I read today's pet of the day post for "cat of the day."  (Yes, I look at it every morning so I have read something happy before clicking over to ccn.com.)  Today's cat, a former barn cat, is described as being "a dog in a cat's body."  Most of the cats up on the site are described the same way.
You never see a dog described as being a "cat in a dog's body."
I have two cats now.  One is starting to fade. She is 17 and spends most of her day sleeping. This would be fine except that she spends most of her day sleeping on my bed. And she's beginning to have accidents. On the bed.
So I've invested in rubber mattress covers meant for water sports of another kind. And I have a plastic shower curtain I put over the bed covers during the day. (You can imagine how attractive it is.) Often, I am irritated; but it's better than being sad. Because I've shared my life with cats since I was a little girl and I know what's happening and I know this is the beginning of the end. Sigh.
Posted by Katherine Tomlinson at 1:35 AM