Megan Abbott's The End of Everything 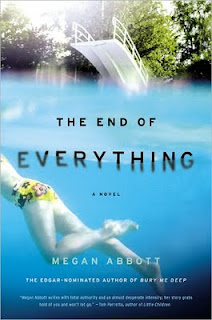 Megan Abbott’s new book, The End of Everything, is a strong story about family secrets and misunderstandings and a girl who doesn’t really know what’s going on. Abbott underplays a lot of things and the most haunting; the most visceral moments in the book are very low-key.

When her best friend Evie is kidnapped, 13-year-old Lizzie Hood launches her own investigation into the crime, uncovering a series of lies that change everything she thought she knew about herself and her friendship with Evie.

As always in Abbott’s work, the characters are strong and realistic. Her view of teenage life is not unsympathetic but utterly without sentiment. When Lizzie starts hanging out with a couple of toxic teens who have their own theories about who might have taken Evie and even her own mother seems to be relishing the drama a little too much, it confirms our worst fears about suburban schadenfreude.

The plot is laced with a suppressed violence that’s almost poetic and ratchets up the intensity without being obvious. Lizzie’s imagined scenario about a character standing outside Evie’s house, smoking and dreaming, is beautifully written.

Abbott never overstates anything, never overdoes the emotion or lets anything get melodramatic. Lizzie is not a particularly credible narrator—she’s always remembering things slightly different from the way they happened—but that works for the kind of story this is.

There’s a lot going on here beneath the surface and in the shadows—the concept of “shadow” is important here, both explicitly and implicitly—and the consequences of both intentions and actions have weight.

Nominally a YA novel, The End of Everything occupies territory somewhere north of the paranormal fantasies and dystopian dramas that clutter the genre. It’s the kind of book that reminds us that labels on fiction are meaningless.

Labels: End of Everything, Megan Abbott, YA