Falling in love with characters 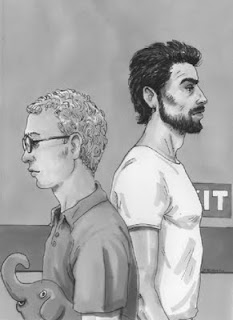 Artist Mark Satchwill and I had to hit the ground running when we first started doing NoHo Noir. We were hired on a Monday and the first story and illustration--along with Mark's logo for the series--were due on Thursday and they went up on Sunday, one week to the day from the Craig's List ad we answered.
We started out with one story a week and now we're doing two. The core characters are still the same as they were in October, when we started, but we have been adding new characters on an almost weekly basis. This week we introduced an ex-husband (actor Garibaldi Fox) and a secret boyfriend (Dale Robitaille).
Some characters are a lot of fun to write. Self-involved, wannabe screenwriter Christopher (who calls himself Christo) is always a hoot. Ditto for the self-righteous Helen Parrish, who is secretly holding another character's daughter prisoner.
It's like creating a soap opera and playing with these characters is a lot of fun. I've plotted out where the various arcs are going to go but sometimes, the characters surprise me. And sometimes I realize...the fates I had planned for them are just too cruel. For example, I was going to have Christo kill himself after one too many disappointments. But after someone commented on the character, I realized it was much more fun to keep him around.
I am going to kill someone off soon though and I hope it will be a shock.
Thanks for your support of NoHo Noir. I hope you enjoy this week's stories.

P.S. The web series is coming soon and it will be animated. A collection of the short stories with connective stories is also in the works.
Posted by Katherine Tomlinson at 1:04 PM