Years ago, I attended my first American Book Association convention representing my then-employer, Los Angeles Magazine. At the table to my right was a vivacious, dark-haired woman named Renny Darling who was there to promote her first cookbook, The Joy of Eating. It was oversized and paperbound, and the pages were decorated with little drawings that gave the whole thing a very “cozy” feel that reminded me of looking through my mother’s recipes, which were often adorned with her doodles. (She’d gone to art school and worked as a commercial artist before I was born.) 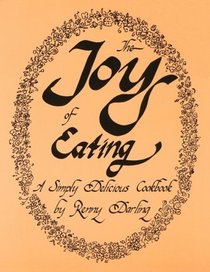 Renny was one of the friendliest, most upbeat people I have ever met and my one real memory of that convention was when she returned to her table after a short break wearing a pyramid hat because two kids were selling them and a book about pyramid power and the whole thing tickled her.
I loved Renny. She was one of those people you sometimes meet that you just fall in love with and want to befriend. I was too shy to follow up on that so I did the next-best thing, I bought the cookbook.
Even at the time, I had a lot of cookbooks, so I figured I’d read through it and probably never really cook anything from it.
And then I stopped on her recipe for chocolate chip banana bread.
I don’t really like banana bread but I do like chocolate and the recipe was dead easy—one of Renny’s abiding principles is “simple is better”—so I whipped up a batch.
The word “orgasmic” comes to mind.
Right out of the oven, the bread tastes like heaven, with little melty bits of chocolate oozing out of it in lovely little dark specks.
Cold, the bread changes texture into something more like a dense bread pudding.
Men who have eaten this bread have proposed to me.
I always make a few loaves at Christmas and give them to deserving friends.
You want to be one of those friends.
The next recipe I tried was Renny’s pumpkin bread with orange juice and golden raisins. You only think you’ve had pumpkin bread until you have had Renny’s pumpkin bread. Her pumpkin bread kicks your pumpkin bread’s ass.
So I bought her next cookbook and her next and a couple more after that.
I have made soups and quiches and a rice with fruit and nuts side dish that was so sinfully good I had the leftovers for breakfast by themselves.
Once you’ve had one of her cheesecakes (she loves cheesecake and all her books seem to have half a dozen great recipes for cheesecake) you will never again be satisfied by those dry concoctions delis try to pass off as cheesecake.
Every single one of the recipes she shares is unbelievably tasty. I mean…Every. Single. One. 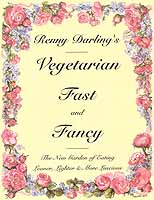 In addition to the books, Renny also had a recipe club with a newsletter offering recipes and cooking tips. (We’re not talking about a wimpy little newsletter either, this mailings ran for some 20 pages.) Rising postal costs shut the newsletter down but then she went online, where she has continued to enhance and expand her brand. Find her site here.
Read her brief memoir on the site and you’ll get an inkling of her warm and chatty style, which is the way she writes her cookbooks.
When you leaf through one of her books, it feels like you’re visiting a good friend who has just printed up the recipe for that amazing muffin you just ate; giving you the secret of the deliciousness because she loves you and wants you to be able to whip up that deliciousness for yourself.
This is a woman who took her love of cooking and turned it into a business and a brand while raising a family and holding a marriage together.
Renny Darling is my heroine.
And she’s written a lot more cookbooks since I last checked in on her.
So I have some catching up to do. And meanwhile, I have the pleasure of browsing through the descriptions of her newest books.
Renny Darling offers free recipes on her site. Here's one.
Renny Darling is on Facebook! Friend her here.
Renny Darling is on Twitter! Follow her @RennyDarling.
Then go buy one of her books.
Any one of her books.
Your life will taste better for it.
Posted by Katherine Tomlinson at 7:22 PM 1 comment: Over the holidays, I took advantage of a SuperEReads offer to create some free catalogue pages for two of my ebooks. Response to their offer was tremendous (who doesn't like free publicity?).  Now, to thank everyone who took advantage of their offer, Karen Dionne and Christopher Graham, the site's founders, are offering the "early adopters" a deal--another free catalogue page for one of our own books or someone else's.


Would you like to have my catalogue page?
The pages look great and you can add as much info as you want, reviews, book trailers, dancing girls, whatever. Ordinarily, there's a charge for this, but I have a freebie I will give away to the next person who joins this site.  Just join and comment here and I will give you the secret password. (Don't dilly-dally, though--the offer expires on January 15th.)
Posted by Katherine Tomlinson at 8:49 AM No comments:

Salt of the Earth 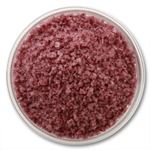 Okay foodies--you think you're stylin' because your salt shaker contains Hawaiian pink salt?  Check out this place. Wholesale gourmet salt that goes way beyond pink, gray and black. (And by black, we mean shiny, coal black lava salt.) And on top of that, this place offers blends that will make you forget you ever heard of lemon pepper salt:  wild porcine salt; ghost pepper salt; espresso salt; or our favorite, vintage Merlot salt (pictured).
Posted by Katherine Tomlinson at 8:25 AM No comments:

The TBR pile--to read or not to read?

I tidied up my office today--always an excellent procrastination technique because you're actually accomplishing something while avoiding some other task--and was forced to confront the reality of my To Be Read pile.  Well, my TBR bookcase to be more precise.
I can't keep up.
That's right, it's a case of "too many books, too little time."
It's not that I read slowly; I'm actually a natural-born speed reader, which comes in handy as I make my living reading.
It's not that I lack the will--reading is my absolute favorite leisure time activity.
"Leisure time."  A concept I'm familiar with in theory but not so much in reality.
I am in AWE of my GoodReads friends, particularly Kat Laurange, who juggles   motherhood, a career, a marriage, charity work and what seems to be a reading rate of several books a day. Every time I look, I'm getting an update on her reading list. I am convinced she never sleeps. (That was probably literally true when her son was just born.)
How do you guys do it?  I know I'm not busier than you are...
And you're writing more than I am too.  So basically, I envy you your productivity and your ability to keep up with everything. (I'd hate you but I like you too much.)
I consolidated my pile of recent acquisitions and it's taller than I am. (This is true, which tells you how much I REALLY don't want to do the thing I'm putting off.)  So clearly, some decisions need to be made. Am I really going to catch up on that series of fat historical fantasies that now numbers three when I haven't read any of them?
Really?
No.  I'm not.  At least not now or in the near future.
It kills me to admit it. It pains me to say it.
Some of those books have got to go.
They'll go to good homes. But I will always regret having to give them up for adoption.
Posted by Katherine Tomlinson at 12:29 PM No comments:

Judging a Book By Its Cover... 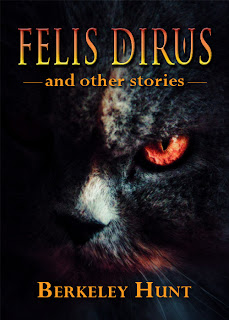 I am surrounded by talented people who create wonderful book covers and one of my favorites, Joy Sillesen, is offering New Year's discounts for indie authors who need covers (and overall book design too). This is her latest creation, the cover for the debut fiction collection of writer Berkeley Hunt, whose work was first published by Dark Valentine.
If you'd like to talk to Joy about doing a cover for you, contact her here at indie author services.
Posted by Katherine Tomlinson at 11:52 AM No comments:

If you haven't already, you must head over to Brian Lindenmuth's short story challenge. I guarantee you'll find something new to read.
One of the things I'm finding as I search out stories for my own posts is how many writers wrote short stories I new knew about. Virginia Woolf, for example. I knew her as an essayist but not a writer of short fiction. Ditto Mary Shelley. (To be honest, almost the only thing I know about Mary Shelley is that she wrote Frankenstein.)Then there was L. Frank Baum who, in addition to all those Oz novels, wrote short stories and more than 200 poems. Tennessee Williams wrote short stories too. Who knew?
Posted by Katherine Tomlinson at 7:36 PM No comments:

One of my clients gave me a basket of extremely high-end bath products for Christmas, and I broke them out New Year's Eve. They smell fabulous...a sensual "oriental" fragrance that reminds me of some of my favorite perfumes, including Halston Night, which they no longer make. (You can buy used bottles of it on eBay if you want to spend $100 plus.) I used to wear perfume a lot, but now I work at home and it seems kind of silly to fragrance myself up when I'm wearing bike shorts and oversized t-shirts belonging to any number of my friends and family.  (I hate shopping for clothes.)
The shampoo lathered up creamy but not bubbly, like the generic brand of shampoo I usually use. And as mentioned, it smelled terrific. As I soaped up with a washcloth I bought at the 99 Cent store (three for 99 cents), I couldn't help but laugh.
The conditioner smelled good too, but left my hair incredibly tangled, so it took me about an hour just to comb it out.  That made me cranky, because the conditioner I buy in quart-sized bottles makes my hair soft and extremely comb-able.
What amazed me was that when my hair was blown dry, it looked like spun silk. I'm not kidding. I didn't have hair that beautiful when I was a baby.
So the rich are different from you and me--they have nicer hair products.
I'm not a vain person, usually, but I found myself staring at my hair throughout the day. (I know what you're thinking--good God woman, get a life.)
But here's my point...I can't imagine a level of personal income high enough to make me feel comfortable spending that much money on shampoo.  I wash my hair every day--I'd be going through the bottles at a rate of two a month. And there's another problem. A lot of the stories I write are about class warfare--the kind of "us against them" mentality that seems to have infected American politics in the last decade. I'm not sure I could wash my hair in the morning and then come to the computer to write if I used shampoo like that every day.
It was a lovely gift and appreciated but I'll be happy when it's all used up because it's way too easy for luxuries to become necessities. And you know, I don't need shampoo that costs more than a meal for two at a decent restaurant.
Posted by Katherine Tomlinson at 10:48 PM No comments: