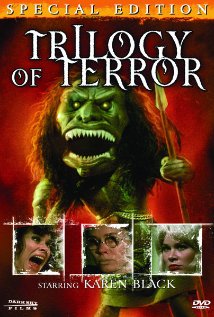 This was a television movie that aired in 1975 and as the name suggests, it was a trio of stories strung together only by their star, Karen Black, who played different parts in each section. I only remember one thing about the movie and that's a scene where a creepy witch doctor doll chases Karen Black around with a knife-sized spear. If you ever saw the movie, you remember that scene (and probably not much else). I suspect watching the movie as an adult would be a very different experience. It's probably campy as hell and not scary at all, but I was scared to death.
Karen Black starred in Nashville the same year she did Trilogy of Terror, and she was also in Airport 1975. (Remember?  she was the plucky flight attendant who ends up landing the plane.) The year before, she'd played Myrtle Wilson in the Redford/Farrow Great Gatsby.  She's still working, and in fact has roles in three movies coming out in 2013.
The movie had a lot of geek cred--Dan Curtis (Dark Shadows) was the director and William F. Nolan (Logan's Run) wrote it.  Nolan also wrote the horror movie Burnt Offerings, which also starred Karen Black and was also directed by Dan Curtis. this is the kind of movie you put on in the background while decorating the house for a Halloween party.
Posted by Katherine Tomlinson at 7:48 AM