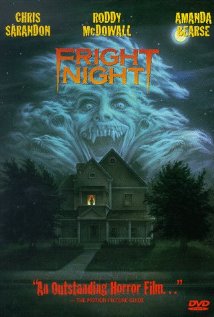 I liked the reboot of Fright Night with Anton Yelchin and Colin Farrell but I liked the original, 1985 version with Chris Sarandon, William Ragsdale and Roddy McDowall even more. In the remake, Peter Vincent is kind of a rock star/Mind Freak kind of guy (and that's a really interesting idea) but in the original, as played by Roddy McDowall, he was a beloved local monster movie host of the sort beloved of movie geeks everywhere.
Fright Night was written and directed by Tom Holland, who has also worked as an actor in a lot of genre movies, including Stephen King's The Stand and Langoliers. He's got a movie called The Ten O'Clock People coming out in 2013.
William Ragsdale, the young male lead, was kind of the Shia LeBeouf of his day. Fright Night was only his second movie (in his first, his character was called "the kid") and he's since gone on to a career that mixes television and feature films. He's also got a film coming out next year, the noir-ish Broken City.
Chris Sarandon as the vampire Ragsdale's character runs across, is smooth and seductive and quite scary. He doesn't have quite the feral ferocity of Colin Farrell's vampire, but you would not want to run into him in a dark alley. (Or maybe you would if you're inclined to fantasize about tall, dark and handsome vampires.)
I liked he way Fright Night played with the vampire mythos. This is another movie that's suitable for family viewing but still scary.

Posted by Katherine Tomlinson at 4:32 PM