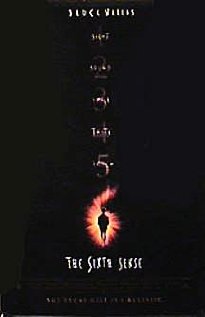 I used to walk my dog with a neighbor who was a union reader (aka "story analyst") at Paramount and inevitably, we talked about scripts we were reading, both good and bad. She'd been on the job longer than I had and was fairly jaded. But one morning she was full of praise for a script she'd read the night before and she told me the story. It sounded good to me too (especially since I'd just read the script for yet another misbegotten remake), but I didn't really think about that conversation until a summer night several years later when I was in Arizona and at a drive-in where Sixth Sense was showing. The moment it started I remembered hearing the plot and so I knew all the way through that Bruce Willis' character was dead.
I liked the movie anyway.
I liked the movie enough to see it again (something I rarely do) with my sister (who was not really a big movie fan). Several minutes into the movie, she leaned over to me. "Bruce Willis is dead," she said.
"How do you know?"
"When he opened the door there was no reflection in the doorknob."
I hadn't noticed that, but she was right.
And so she knew the twist of the movie all the way through and still liked it.
The movie doesn't really have a lot of scares in it. There's a shock moment when we see a girl who was murdered by her mother (the late Brittany Murphy) and another near the very, very end when the boy sees a dead person who's wandered off from an accident up ahead. What works in the movie is the relationship between Bruce Willis' character and the boy's, played by Haley Joel Osment. (Haley Joel Osment is 24 now, does that make you feel old? He was just 11 when he appeared in Sixth Sense.)
This is a movie you'd put on at the end of a marathon of Halloween movies to mellow everyone out before they head home.
Posted by Katherine Tomlinson at 5:55 PM