Your Heart is a Muscle the Size of a Fist 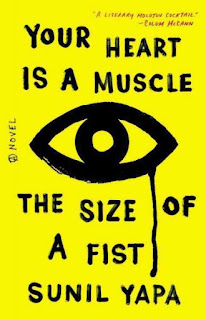 I am a huge fan of Ryan Gattis' multi-POV novel All Involved, which revolves around the L.A. riots that ensued when an all white jury acquitted four white cops for the horrific beating of Rodney King. When this book popped up on a friend's list of the books she'd read last year, I was intrigued enough by the title, to find out more. Set in 1999 during the Seattle protests over the World Trade Organization meeting being held there, Your Heart is a Muscle the Size of a Fist was Sunil Yapa's debut novel. Here's the NPR review of it. Like All Involved, the story is told by multiple characters, including a kid who's in the streets, not to protest but to sell marijuana to the activists. The NPR reviewer found Yapa's work full of compassion but decided, ultimately, that his execution was a little amateurish.On Amazon, the book has 92 reviews and comes in with a solid 4-star ranking. The top review is headlined, "Edgy, Dystopian, Melodramatic Lyricism." I'm willing to forgive a lot if a book gives me passion and lyricism. This may be my first book purchase of 2017. I'll get it here.

Posted by Katherine Tomlinson at 11:59 AM

Labels: All Involved, Rodney King, Ryan Gattis, Sunil Yapa, Your Heart is a Muscle the Size of a Fist