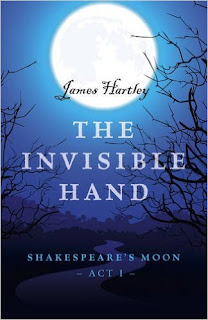 The Shakespeare Standard has an interview with Invisible Hand author James Hartley today, and his new "Shakespeare Moon" series sounds intriguing. The plot takes a contemporary kid back to Scotland and entangles him with the events of Macbeth. I think that's a fantastic idea. I never understood why high schools insisted on inflicting Julius Caesar on students as their first introduction to Shakespeare. Yes, yes, it's got "Friends, Romans, and Countrymen, lend me your ears" but it's really not one of the most riveting plays. But Macbeth?  It's got sex. It's got intrigue. It's got WITCHES. Start out with Macbeth and you might just end up with a kid who likes Shakespeare.

The Invisible Hand is about a boy, Sam, who has just started life at a boarding school and finds himself able to travel back in time to medieval Scotland. There he meets a girl, Leana, who can travel to the future, and the two of them become wrapped up in events in Macbeth, the Shakespeare play, and in the daily life of the school. The book is the first part of a series called Shakespeare´s Moon. Each book is set in the same boarding school but focuses on a different Shakespeare play.
Posted by Katherine Tomlinson at 10:40 AM