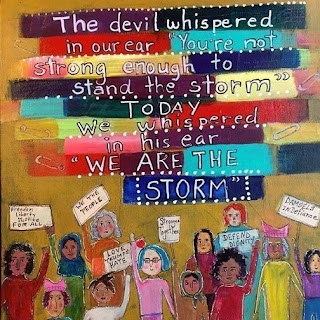 I marched today in a sister/solidarity march for the Women's March in D.C. The crowd was packed with women and men and children, and dogs. The signs were an eclectic collection of pleas, protests, and observations about a variety of issues. Mostly, in line with the wishes of the organizers, there were no anti-Trump messages.
There was a lone Trump protestor who waved a black flag with Trump's name on it and randomly shouted, "Who did we elect?" He was drowned out by shouts of "Love trumps hate."
This poster art was shared with me by a fellow marcher. I don't know who the artist is, but I love the sentiment so I hope s/he won't mind that I've shared it here.
This is a movement.
We are not going away.
We will hold the president and his cabinet accountable. And we will not let the "new normal" destroy the country ALL of us hold dear.
Power to the people.

Posted by Katherine Tomlinson at 4:35 PM