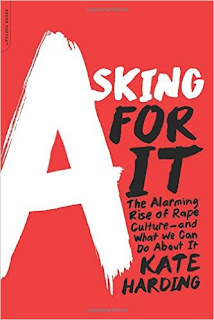 The phrase "rape culture" has recently resurfaced in American discourse--fueled by the charges against predators as diverse as Bill Cosby, Bill O'Reilly, and Bill Clinton and the boasts of our president elect--but this book does the best job of clarifying the "problem" and offering solutions.
This is from the product page:

Every seven minutes, someone in America commits a rape. And whether that's a football star, beloved celebrity, elected official, member of the clergy, or just an average Joe (or Joanna), there's probably a community eager to make excuses for that person.

In Asking for It, Kate Harding combines in-depth research with an in-your-face voice to make the case that twenty-first-century America supports rapists more effectively than it supports victims. Drawing on real-world examples of what feminists call "rape culture"—from politicos' revealing gaffes to institutional failures in higher education and the military—Harding offers ideas and suggestions for how we, as a society, can take sexual violence much more seriously without compromising the rights of the accused.