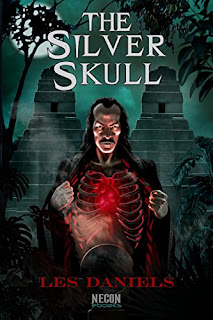 Really, nothing says "holiday" like a vampire gift. I remember years ago when the last book of the Twilight saga had been published and my nearest Bookstar couldn't keep the trilogy in stock at Christmas. The sellers knew it was going to be a phenomenon but even they were taken aback (and brought up short) by the demand.

The paranormal book world has moved on since then, but if you have a hardcore vampire fan on your wish list, you might want to stuff their stockings with some old school bloodsucking reads like Les Daniel's awesome Spanish/Aztec The Silver Skull. (It's actually part two of a duology, but it can be read as a stand-alone.) The book is out of print but pretty readily available as a used book on Amazon. (

There's a more expensive hardcover version available on Etsy and if you go on Etsy in search of the book, why not pick up some "Vampire Kisses" bathbombs while you're at it.) 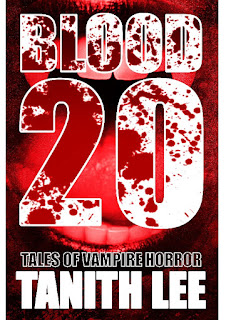 Continuing the Vampire theme, no collection of vampire horror is complete without the late, great Tanith Lee's Blood 20, which is available from Telos Books, a UK publisher. it's not cheap at almost 15 pounds, but while supplies last, the books come with stickers signed by Lee herself. This one is definitely on MY wish list.

If you're looking for an historical vampire novel for someone who has already read Barbara Hambly's Those Who Hunt the Night or Elizabeth Kostova's The Historian, you might check out Lauren Owen's debut novel The Quick, which is set in Victorian London. 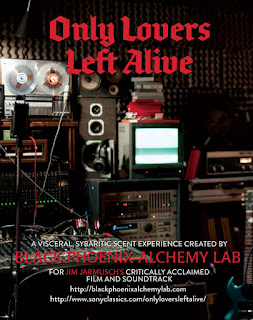 If you're a fan of Game of Thrones, you may not know that before he embarked on that epic book journey, George R. R. Martin wrote a series of one-off horror novels including one called Armageddon Rag (about a rock band that resurrects their lead singer) and Fevre Dream, a dark, sensual nightmare of a vampire novel. It's a vampire novel for people who don't think they like vampire novels and it's a lot of fun. More Vampire-themed stocking stuffers include Black Phoenix Labs' perfume oils inspired by Jim Jarmusch's lush movie Only Lovers left Alive. You'll need to act fast, though. Cut-off for domestic Christmas mailing is today, December 13. Other vampire-themed gifts that aren't books include Dracula t-shirts found on Red Bubble (mostly featuring various Bela Lugosi images) or the super-cute Japanese-inspired "Dracula blood-drive t-shirt that features tiny Draculas. (Find it on Snorg.) 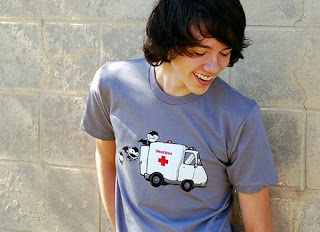 Posted by Katherine Tomlinson at 12:31 AM