Once Upon a Curse--17 Fairy Tale Retellings 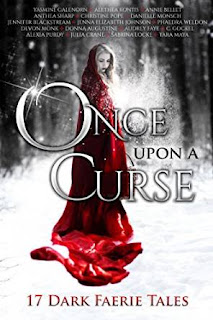 I just bought Once Upon a Curse (it's a boxed set selling for 99 cents on Amazon) that's chock full of fairy tale retellings. The only story I've read before is Christine Pope's "The Queen of Frost and Darkness," a Snow Queen retelling that originally ran in Dark Valentine Magazine.

It's a fantastic collection. Here's the review I just posted on Amazon:


Witches and warriors, demons and darkness, brave women and true love, and a vampiric take on a classic fairy tale—it’s all here in this boxed set, and more besides. Because many of the stories have layers to them that remind us of other stories and folk tales and ballads, like the silver dagger Yarrow carries in the collection’s opening story, “Yarrow Sturdy and Bright,” by Devon Monk. This is a fierce, feminist take on “The Pied Piper,” and it sets the tone for the stories that follow.

The stories run the gamut from reimagined Celtic folklore like Anthea Sharp’s “Fae Horse,” a wild ride on a NightMare to Christine Pope’s lyrical Russian take on “The Snow Queen.” C. Gockel’s urban fantastic version of Cinderella features a wildly sympathetic stepmother, a “stepsister” who’s a 15-year-old gay kid exploring his own fabulosity, and a whiny “princess” whose diva antics are consistently amusing.

Audrey Faye’s “The Grim Brother” has one of the best openings in the book, “Some say children can’t be evil. I know differently. I stand here, looking at the fresh mound of earth in front of my sister’s gravestone, and know that I have buried evil in consecrated ground. For a priest, there is no greater sin.” No reader on the planet is going to stop reading there. Faye goes on to tell a haunting version of a familiar tale that is beautifully crafted and so elegantly simple that it feels like you’ve always known this version of the story, that this is the only one that tells the truth. And there’s a lovely little character Easter egg thrown in for good measure.

Another story of note—this is a really strong collection, so these are just my favorites—is Jennifer Blackstream’s version of Rumpelstiltskin, “The Final Straw.” It’s another story with a sneaky little shout-out to another fable in its closing sentences. And what would a book of fairy tales be without a unicorn? The collection concludes with Alethia Kontis’ “The Unicorn Hunter.” You’ll enjoy that one so much that when you click the little triangle to take you to the next story you will be disappointed to find you’ve reached the end of the book!!

Posted by Katherine Tomlinson at 10:10 AM