All Involved by Ryan Gattis...a review 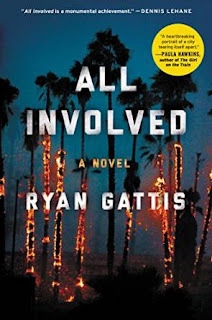 This novel, inspired by the events of the L.A. Riots in 1992,  interweaves stories and points of view in a cinematic way (think CRASH or SYRIANA) with the authenticity of actual events told the lens of Gattis’ multi-cultural cast. It makes a wonderful copansion piece to Anna Deavere Smith’s TWILIGHT, her one-woman, multi-character theater piece about the L.A. riots that erupted in the wake of the verdict in the Rodney King case.

And while much of the L.A. riot coverage focused on the clashes between the African-American and Korean communities, this novel also gives us a snapshot of one complicated extended Hispanic family (both blood family and gang affiliations). Gattis has done a terrific job of getting inside the heads of his characters, particularly Lupe (aka Payasa). .

The characters here are complex and mostly sympathetic, and the adage “Live by the gun, die by the gun” has never seemed so apt.

There’s not a whole lot of story here, but what there is, is absorbing. The plot has a lot of different threads that are woven together, with unexpected connections every step of the way. This is a lot like CRASH, and it’s visceral.  No one group is singled out as the good or bad guys and Gattis does a terrific job giving us viewpoints from all different directions.

The throughline is the riot itself, and Gattis occasionally jumps around in time, visiting one scene from several different points of view. It’s almost a shock when we see Lupe/Payasa from an outside viewpoint. We’ve been inside her head so long that her behavior, though extreme, seems normal under the circumstances.

The writer also takes us inside the heads of several characters in their dying moments and while that sounds gimmicky, it’s also very, very effective. It would be easy to dismiss the gangbangers around Payasa as simple thugs but they’re a lot more than that.

There are some very strong female roles here and they run the gamut from totally sympathetic—single mom Gloria who cares about her job and is beginning to care about firefighter Anthony—to the totally broken, like Cecilia.

This is just terrific character-driven fiction and a must-read for anyone who remembers the riots.

Posted by Katherine Tomlinson at 1:49 PM