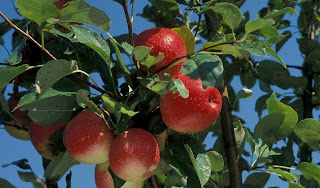 Just as Envy apples are going out of season, there's a new apple in town, something called a SweeTango. It's another red and gold variety that looks like it's been polished even when it's just piled in bins waiting for you to walk by and admire them.
You know it's something special when the produce guy sees you looking at the display and launches into a spontaneous, lyrical endorsement of the fruit,
"Better than an Envy?" I asked skeptically, because as far as I am concerned, the Envy is the perfect apple. I first enjoyed it last year when it was in season for three minutes on August 5. This year it was available for a lot longer--seems like it was around for almost two months--so I could splurge a lot longer. (And "splurge" is definitely the word. At $3.99 a pound, Envy apples aren't cheap.)
"Better than Envy," he said. "Want to taste?" And he whipped out his knife and cut me a couple of slices.
If the apple Eve ate was a SweeTango, the trade off was worth it.
A perfect balance of sweet and acid.
The perfect crispness.
Just the right juiciness.
It is an 11 on a scale of 10.
I was not surprised to find that the SweeTango is a cross between a Honeycrisp (my third favorite apple) and something called a Zestar, which I've never even heard of.
SweeTangos are also a splurge item. In L.A., they're only carried by one supermarket chain and it would be the upscale Gelson's. (Since Gelson's is handily located half a block from me, my access to the apple goodness is limited only by their hours of operation.)
If you like apples, you really, really, really need to track down this apple.
Posted by Katherine Tomlinson at 11:33 AM