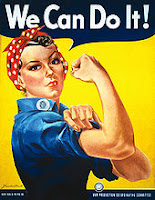 We've all seen the iconic image of "Rosie the Riveter" rolling up her sleeves and proclaiming, "We Can Do It."  The image we know was created by Pittsburgh artist Howard Miller. the model was Geraldine Hoff Doyle, a 17-year-old working as a metal stamping machine operator in Ann Arbor. 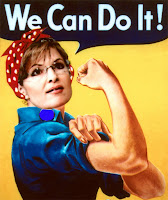 It's such a powerful  image that even though Norman Rockwell later painted a "Rosie the Riveter" cover for Saturday Evening Post, the Miller poster is the one we remember.
And it's also the one that has been used ever since as a symbol of female empowerment by candidates and others on both sides of the political spectrum. During the 2008 campaign, there were several versions using GOP Vice Presidential candidate Sarah Palin. The visual fit the candidate's roots and persona as a "can do" kinda gal, and you saw a lot of it. 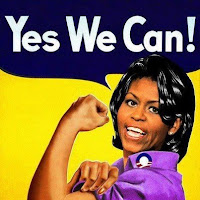 In 2012, there being no women in the running, Michelle Obama has inherited the "We Can Do It"  image, which is sometimes captioned "Yes We Can," to echo the motto of her husband's 2008 campaign.
This campaign season, in one way or another, it has been all about the women. Both the Republicans and the Democrats showcased an amazing parade of smart women who represent the best their parties have to offer. It was thrilling to see all of them.
In the immortal words of Dirty Dancing--"Nobody puts Baby in the corner." Women voters will mostly likely decide who will be President come 2013. We can do it. Yes we can.

Posted by Katherine Tomlinson at 12:51 PM