Monday Excerpt from The Waking Dream

The Waking Dream is a "new adult" paranormal romance that I think is a little different from the usual run of PNR.  I have always been fascinated by dreams, and this story grew out of an idea I had while reading about new sleep therapies. It's a quick read--roughly 21K words, which is a novella. Here's the first chapter. 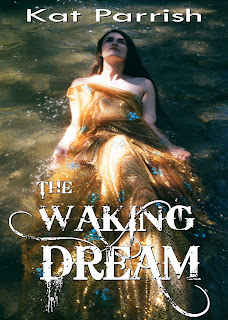 If you have a sleep disorder and you google “treatment” or “cure,” chances are one of the first links that comes up is the website of the Alviva Sleep Clinic (ASC), the revolutionary medical center run by Dr. Lauren Alviva and her two oldest daughters, Dr. Kitta Alviva-Fujiwara and Mira Alviva, Ph.D. It’s kind of a boring website—a homepage illustrated with stock photos, a contact page, an “about us” page. There are no links to social media, no auto-playing multi-media elements, no newsletter registration forms popping up.

It almost looks like something the doctors put up themselves using a Squarespace template and YouTube tutorials. The copy hasn’t been SEO’d. There’s no attached blog either.
It’s almost as if they’re not trying.

But having a small digital footprint hasn’t hurt the clinic’s business. On the contrary, like a new restaurant that doesn’t publish its address or a club that opens in a new location every night, people “in the know” always seem to know where to find it.

The clinic’s unorthodox treatments for insomnia, sleep apnea, REM Sleep Behavior Disorder, narcolepsy, and sleepwalking are controversial but effective, and there’s a sixteen-month waiting list for the thirty-bed clinic tucked away in a picturesque valley in upstate New York.

The results ASC achieves are noteworthy and consistent. Former patients have left glowing testimonials on the website and rapturous reviews on Yelp. The local papers and lifestyle magazines regularly feature one—or all—of the Alvivas in articles that are as much gushing personality profiles as they are business stories. The various doctors Alviva have been featured in national print media as well, and Lauren’s expertise makes her a sought-after guest on cable and broadcast television. Everybody wishes they could sleep better.

The doctors are all extremely photogenic, all of them tall and Nordic blonde, like a group of Valkyries who decided to come to earth for a spa day and then stayed to open a sleep clinic. So that plays a factor in getting the word out as well, although Lauren Alviva discourages what she calls “the cult of personality” surrounding herself and her daughters and makes every effort to frame the clinic’s narrative as being a team effort.

It’s a big team. The ASC employs a fleet of psychologists and board-certified sleep specialists as well as nutritionists and personal trainers who work together in a holistic fashion, using everything from massage to sleep restriction therapy to tackle deep-seated sleep issues. The clinic offers seminars on stress management—open to the public as well as the in-patients—and provides customized vitamin and supplement regimens to combat insomnia and restless leg syndrome.

Successful as those therapies are, they are not the only source of the clinic’s reputation and the impassioned devotion the doctors Alviva inspire. The most enthusiastic praise for the clinic is a result of the program Lauren calls “Deep Dreaming.”

Thanks to the technologies and techniques she’s developed, Lauren and her oldest daughters can access their patients’ subconsciousness and participate in their dreams. This tandem dreaming makes it possible to access the deeper roots of sleep problems and other psychological factors that might be in play. The procedure is less invasive than it sounds, and often when the patient wakes, he or she has no memory of what happened while they were sleeping.

When the Alviva Clinic first introduced “Deep Dreaming,” it seemed like science fiction. To say the sleep science community was less than enthusiastic was an understatement. Most were deeply suspicious—suspicious to the point of paranoia.

North America’s premiere sleep specialist, Dr. G. Taylor Wells of the University of Toronto, was particularly vociferous in his opposition to the tech-assisted therapy, calling it “downright dangerous” and “criminally irresponsible.”

The patients disagreed. And they kept coming to see one or another of the doctors.
Each of them has a different area of specialization.
Lauren’s area of expertise is sleep-walking, sleep-talking, and night terrors--parasomnias all her daughters suffered in childhood.

Kitta, whose wife Mai Fujiwara was killed while working with Doctors Without Borders, specializes in helping people deal with PTSD and other conditions brought on by trauma. The Deep Dream treatments take a lot out of her and she can’t schedule more than two or three a month without suffering from PTSD by proxy herself.

Mika’s practice is almost entirely limited to those who want to change behaviors, whether it’s an addiction to drugs or overeating. The clinic offers a “money-back” guarantee for patients who relapse and most of them use the money to go through treatment again. The Clinic rarely must refund a client more than once.

If that’s all the clinic did, it would be enough to keep it in business for decades but there’s another treatment option that’s “off the menu,” so to speak, an option you won’t find mentioned on the website or in the brochures or even in the Yelp reviews. The clients seeking this unnamed remedy usually arrive at night, often by helicopter and nearly always in disguise.

They’re not here to be treated by the famous Dr. Lauren Alviva or her equally famous daughters Kitta and Mira.

They’re here to see me.

Posted by Katherine Tomlinson at 8:47 PM