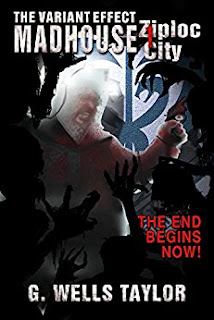 It’s never been easy working the squads, and in the aftermath of the GreenMourning operation, it’s gotten worse. Friends and colleagues died during GreenMourning, and something essential died with them. So now, everyone’s on edge knowing that the city-wide quarantine and their own efforts aren’t going to be enough if the Variant Effect takes hold of the population and spreads like a wildfire the way it did before.
The extreme psychological stresses experienced by squads had made those rules flexible, as if in homage to the days when the Variant Effect had first appeared, when half the force was drunk most of the time. They called it “cranking” when they used alcohol and drugs in the misguided belief that anesthetizing their nervous systems made them resistant to the Variant Effect.
Science had never proven this to be an effective barrier against infection, while it easily drew a correlation between cranking and absenteeism, insubordination, injury and accidental death.
However, the authorities knew that working the squads was dangerous and psychologically damaging with higher mortality rates than the police services, so members were given leeway for eccentric behavior.
But there were still limits.
And “Beachboy” has reached those limits.
While his impulsive initiative and instinct for action has saved squad members and civilians many times, his reckless, guilt-fueled death wish is propelling him toward a foregone conclusion. It’s only a matter of time before that wish is granted. And he might just take some of his closest friends with him.

In Madhouse, author G. Wells Taylor returns to the world of his Variant Effect series, bringing us into the lives of the men and women who risk their lives—and their sanity—to protect Metro from the skineaters. Led by veterans of the last Variant outbreak—Borland and Hyde—but it’s a new day in “Ziploc City” and none of the old rules apply.
This is a series that just keeps getting better and better as Taylor finds new ways to ring variations on his Variant plague. If you like apocalyptic stories about science gone wrong, you will love these books. And from now on, just hearing the word “skin” will be enough to make your skin crawl.
Enjoy!

Posted by Katherine Tomlinson at 9:06 PM